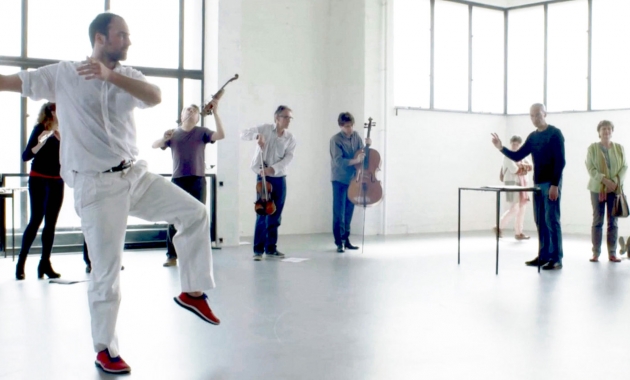 So this curious speckle was on Friday at WIELS for Rosas+ICTUS’ Work/Travail/Arbeid. Although I could only spend couple of hours, in a way I think I had the luck to experience to quite an extent the piece. The work.

Coming to the exhibition, I tried having as little expectations  possible – as difficult as that is/was, being that firstly the piece itself, but then also ICTUS’ “regular” Vortex Temporum performance has such strong impressions on me. But, luckily – managed… and kept the mind and senses open to this totally unexpected new experience. Of music. Movement. Human. Time. Temporalities. Realities.

When I came, it was just the dancers in the space… it was quite interesting and pleasurable. The movement at work that transfers to sound of that movement that then occupies the space, it was already something enough. As if the “birdiest” of microscopic views. The movement became the sound.

But then Jeroen Robbrecht came and from that point on, for me, the experience became quite… well… spectacular. Having in mind, and ears, the full spectrum of the piece, the vortextian manipulation of sound through multiple modulations, but now just hearing the one layer of this “arpeggio in time and space”- it brought out this incredible solace. Of sound itself. But also of the performer. Its inner mind and thoughts. The whole working process, which happens in solitude. Which even after when together in the group remains through the execution of own part that always stays to be a moment of individual act.

Luckily, by accident, I think I found myself on the perfect spot, again at least for me, in the perfect moment – when Robbrecht transitions to the second room and the dancers exchange spaces through out till the end I was just on the far opposite entrance wall. With this viewpoint, through sometimes synchronised, sometimes un-sychronized movements, whether they be interpretation of sound or imagining vice versa, with these several layers one can perceive, the “Temporum” itself was not only the time, a container within which things, spiralling vortextian things, happen, and we perceive them through the temporary microscope envisioned by Grisey as people, whale and bird times.

Clearly, the obvious real time is probably the one where the sound really exists, the time in which the audience perceives it (whether it is through macro, micro or a human perception). But through these three bodies, Robbrecht and two dancers, the other two temporalities I think of came in play – the one of a thought of what is this sound, how does it sound – the temporality performer has before the sound is materialised for us to hear. Which in a way makes this sound actually already be existing, before it reaches the physical ear of the public. And then the third temporality in between these two – the one of a gesture, a movement of the performer has to do in order to deliver this thought  through perceivable sounds. Which happens in time slower than of inner heard sounds, but still faster then the sound perceived by others.

Going back to how this was even more amplified by this space, room, position – it was as if only one of the spaces is the one we can actually see/hear, and everything else is this “mirror” world – reflection on and of artists mind, work process, states he goes through… It was as if really having the glimpse into the mind and heart of a performer. And through him – the soul of the sound, as if it/was human.

It was as if, instead of tones undergoing their own modulation in fulfilling the compositional plan, audience is the one transported, “modulated” through existence portals. As if audience, through this exchange became the note, the tone of  a chord him/her self that then “becomes the spectral complex”, and through the movement, altogether with the performers movements “the rhythm, that transforms into a wave of unexpected duration”.

All the while experiencing not only the performance, but the working and thinking process of a performer. This moment of solitude and solace, but in public. Which I suppose for a live performance anyway always comes back to be the case – no matter how much of the work is done between the four walls, the moment when it is confronted and in contact with others is when this musical (or other) thought comes to life…

And then this was taken even step further – when Igor Semenoff came on. Adding another layer to already experienced. But not as because it was a “missing” part of the score from what happened before. Not at all! It was just a new time, a new existence of a thought. The same thought, but through a different person. And his performance was so drawing and engaging – and through his energy filled pauses one didn’t only experience the sound that was just happening then, but rather through this energy field he recreated the feeling of the whole ensemble being there! As if you could hear the others. Which brought the relief of connection, of this solitude being just a temporary means to future human connection. (I suppose this is something where knowing the piece helps… but it would be of no surprise to me if this was as well felt by those who maybe don not know the piece in full.)

And oh my – if it was impressive how in a “regular” performance Jean-Luc Plouvier was playing a moving piano – this was ever so much more impressive in this setting! Again, through these eyes and ears that isolate, only to enhance the link to collective – this movement wasn’t just an impressive performance, skill and technique thing and move, but it was as if it was an expedition of the heartbeat through all time, all temporalities. Heartbeat of the sound, since it became a human. Exploring how to enchant and inhabit each and every soul present. And all the previously “exposed” layers came to exist and become a collective, with the fact of presence of more people. Still each an individual, and yet all part of one.

Wondering on a personal note – I don’t know if the fact of repeating the performance day after day (so many days) can make it become for a moment a bit frustrating (not daring to say boring)… but if it ever does, could it be even a plus as experience for a performer himself? As one is working (in the private of their own studio), one is probably going to go through that state as well. Here, it is just that the performance space becomes the “artist’s studio”. So in a way, while being the performer, the artist at work is also a member of the audience – extracted from its own body, you are just not experiencing only the act of performance, but experiencing yourself. The self that is currently not actually there, but the self that is always and stays always in the studio, home… ? But then again, maybe the everyday repeating never does get frustrating… Because, after all, there will always be at least one person in the audience (and surely many more at any given moment) who will have the experience of the piece for the first time, and as such provide the “élan”, energy that comes from and for that experiencing.

Lastly, although this could probably be said “for all public performance”, it goes a bit more for “Work/Travail/Arbeid” – it is definitively a precious experience for those in audience who are themselves performers.

A Time Vortex indeed. A whirling mass of thoughts expressed through sound and movement, exploiting and bringing to life different time dimensions.