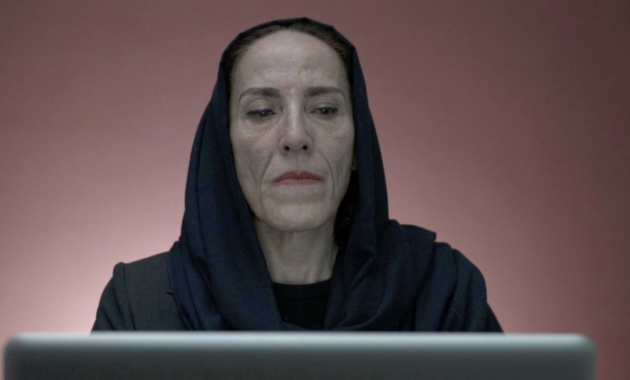 While we walked down the narrow yet illuminated path, the room of rubble and broken things awaited. We enter the space of broken. Of broken self.
The madness is waiting.

Not even lurking. It is there. Because, though it is always a part of each of our own self, once that is awaken it remains to exist, even if only in thought and (self)awareness.

And how simply “just right” this madness was. Simone Aughterlony was just sublimely disturbing in its constant presence while continuously resembling a vision. Both tiled and veiled-up, dressed yet naked, with its mesh visor-like face that made a powerful impact of silent non-silence and evoking a feeling of probable constant pulsation of words, un-hearable yet heard. A truly thought through work of Silva Hasenclever+Valerie Perin (costumes+masks).

The brokenness didn’t happen. It was done. As we will discover. It was made by people. By people to people. To a person. But even if this is a story of one person, it is a story of all people. The not understood, the feared, the “unboxable”. Who got broken out of the attempt to be tamed, moulded, placed in one of the “correct” boxes of existence. Even if this is a story of one person, in one specific place on Earth, somehow it feels this can be a story of anyplace. As it could have happened in one or another time in some other place. In one of the past (but hopefully never future) states of the “evolved”.

This work, said to be simply “music-theatre/film”, is somewhere between an opera a theatre a documentary a film a radio drama an installation a sound installation… Or, not really in between, but rather everything of the above.

The audience, becomes one of the unexpected protagonists, one of the sides of the main protagonist, the moment it walks in. As we walked down the narrow white illuminated path over and through the stage, we entered the broken mind of our protagonist, in order to join her mad-self in the “audience”. Mixing with its madness. Getting (un)comfortable with it. Changing places with it. Acknowledging its undeniable presence.

And so it begins…

The sounds of glitches winds bellow-like sighs and breaths… crushing breaking stomping… shivering air and waves of chords and strings… It all made us hear the inner thoughts. It made us feel the physical tremors that heavy thoughts can make. (Although, if you are to see the performance, do pick a seat somewhere around a least 5th or 6th row… would assume that the specialisation is better on that “hight” and the surround effect must make even greater impression of feeling the physicality of the sound. Thought nevertheless kudos to Alex for a great job, as always!).
As the story in which we were thrown head first unfolds and Mitra is reaching out for help, the sound of typing takes us to the ever familiar ways of communicating of today. The words and content seemingly always concise, yet a letter or two… a word here and the… always escape… enlarged in the mind (and in front of our eyes, spanning sometimes even over both screens), they are the “silent non-silence” and “unhearable yet heard” of Sanity transitioning to Madness.
Confronted with the mass, now we, the audience yet also “the other self”, the unexpected protagonists, might be surprised with almost trivial, literal, “announcement” of the choir. Their sounds, melodies, ways and presentation, constructed in almost late-renaissanceian baroqueian way, in the context of “listener/audience” might seem to appeal to that “educated”, historically-recognizable, appreciated, familiar. At first might have seemed… off… even, “wtf” really (no caps though). some chuckles in said audiance might have crackled. BUT… oh does one find oneself surprised with a perfect match made!! This almost “ridiculous” way and the use of the more pleasing, commonly attributed as “beautiful” way of music, just emphasised the role, place and context of how a mass, a group (of neighbours, doctors…), can just be following through inherited feeling of “right” and not by analytical thought of what could be all right, now. Today. For tomorrow.

Drawn into the story, one can almost forget that the most of the sound/music is prerecorded. Especially with the constant physical presence of an actual body of a performer (or few, not to reveal everything). Which is why the perfection of that first appearance of live voice coming out and over all the challenging sounds, with a melody pure and simple yet almost ancient, somehow both western and middle-eastern, is a perfect voice of the sane Mitra. A woman of old and new, of tradition and science, strong and weak, between worlds and times. Sane Mitra, going insane. Captured in her own madness of sanity in fight over imposed convicted madness, as she (Claron McFadden) is walking away from the stage, from that broken part of her, you realise that that might have been that moment of crystallization of her mind, into equal sanity and madness. Their separation into two entities, that from now on will have to coexist accepting that the latter is there to be aware of. At the very and, and for the only other live voice appearance (the only two live sung/spoken moments, that in number seem few but in its power of balance, presence and execution they are everything) she will be calculated. Precise. Almost… Cold. But not because she is cold, but for she was made to be calculatedly expressive, by the experience she endured.

And all this enhanced through spectacularly beautiful, painful, taunting images (Jorge Leon+Aliocha Van der Avoort) and colors…. spreading over two screens… two parts of the mind… sometimes showing the outside world… but ever so often the possibility of what might be the inner one.
MITRA is not an opera, but it is. It is not theatre, but it is. It is not a film, but it is. It is not an installation, but it is. Mitra is not, but she is.
If you happen to be among those who, no matter how much you lovelovelove opera, you start to see that the way we were expected, or offered (or something third), to experience their main female protagonists is always as “judgy” observer of a “mad/sad woman doing things”, this work will also make you challenge that way of perceiving. Whether she had a laps from sanity or not can remain your question, but this work changes your perspective of experiencing her story by putting every spectator in a position of not only observing behaviour of an insane wild unreasonably-willed women, but experiencing this tormented protagonist as if you are her.

One would think that there would not be a worse (in a good way) experience then the feeling Haas’ 2015 KOMA would make you feel… as if you are the one living the story, from being that main protagonist that is in coma. But… experiencing madness through this work, its sound, visuals and gestures, it seems as it was… an analog virtual reality experience. If that makes any sense.

It would seem so appropriate to end this with a quote of the the last phrase s-aid/ung by Claron McFadden. But out of respect for all those who are yet to see the performance, i leave the words to echo through the space and time driven by their own power.

Details about this performance/production/future-past performances could be found on ICTUS.be .

Featured image: (c) Still from MITRA by Leon and Reiter/ICTUS