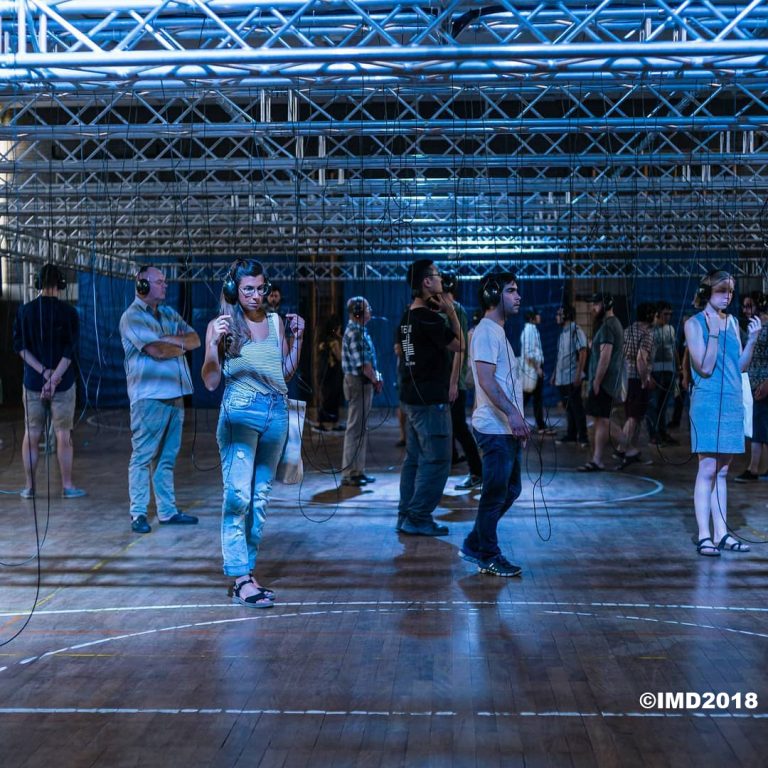 The Darmstädter ferienkurse für neue musik had its very first performance of the festival. Well… No. Not a performance. Not an installation. A sound immersion! Because Christina Kubisch’s ‘Orchestra on a Wire’ was just that (for me at least).

Mesmerizing seduction between the human and the sound. Coquetry not only with the form and perception, but also in and with every detail – including the audience becoming, being active part of the work. And the work, while being seemingly “one” output, becoming individual new composition for each spectator.

Perfectly timed, the whole experience started “from afar” – luring us in with delicate noise, becoming more and more present until exploding through the actual wires, and expanding further by one’s proximity to them. The very wires were almost like materialization of sound waves, beams… Weaving their way through space and time, and around and through one’s soul. If you would have stopped for a second and looked around, seeing all those bodies move slowly then fast, then slowly… then fast… searching… curiously eagerly calmly hectically… It was like a dance of seduction, a mating ritual. Where we were all in the same space, but each one of us in their own temporality. Free, happy and unconstrained to search for connection with the sound. And then, suddenly and unnoticeably as if the sound escaped from the wires, maybe (probably) through one or each of our bodies, and started to live in the present space and time. First in one string, then another, then another, until the whole quartet become alive. Arching slowly through this maze of bodies of sounds, its emitters and receptors, the electronic sound and pulsation morphed with the space, as if all of it has transitioned through us to the actual space and into the instruments… Just as the whole performance started, silently introducing the alternate field we are about to walk through, we came to the end as if the plate has flipped – the alternative world became the real, and we became one with the sound. Carrying it, preciously, within each and every one of us.

If you missed this performance, do make sure to see if/when/where you might be able to catch it!