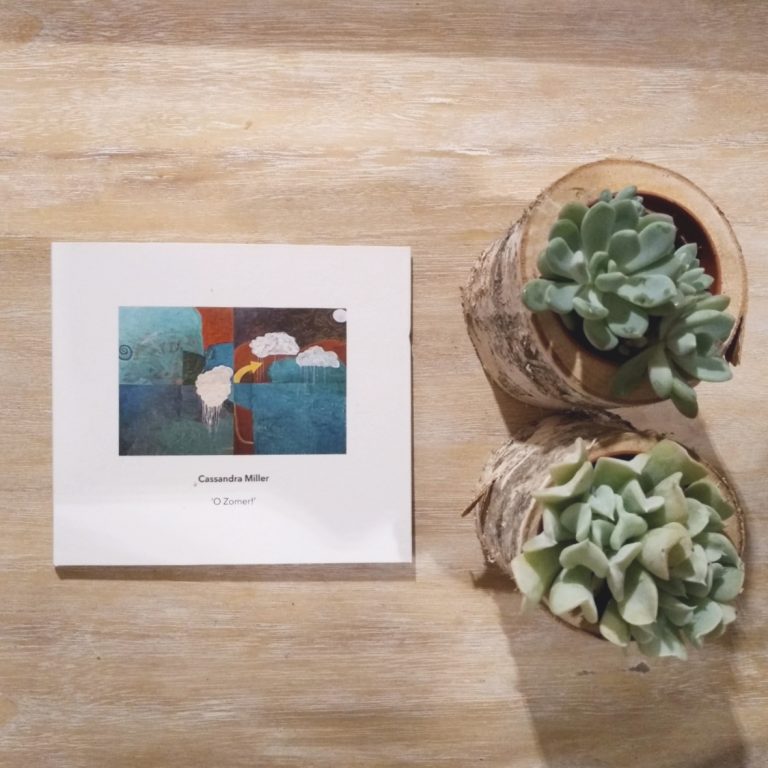 This piece of aural beauty arrived just in time to give that special sprinkle of wonder and make the weekend magical! Because Cassandra Miller‘s CD “O Zomer!”… it is, simply put, pure magic!

The process of listening (or, well, my process of listening when purely being in the role of the experiencing-receptor) is almost always: listen before reading. Be it live performance or a recording. So this will in a way be another transcript of thoughts and emotions, all the “holy moleys” “OH MYs!” “daaaaaaamns” and other more curse wordy equivalents of positive excitement, that got triggered only by popping the recording in and pressing play. What followed after was another (and another, and another, and another…) listen.

Two turbulent flows brandish.
It seems as it is the sea and the air.
It starts to feel as if they are having this battle, over a half broken glass bottle.
It might not be a bottle. But a very glass looking shaped stone.
They are hitting and bouncing it around.
But… a second passes and you realise that they are not fighting over it. They are together shaping and purposefully interacting… Into creating.
The wave trying to sand off some bits more, polish and shine this object’s surface and sharp edges. So that the wind can pass unharmed through its narrow bottleneck like passage, and start to give it a voice.
The winds have gone. Only the gentle knocking and rolling over the sand banks by the waves remain… a final polish before the grandiose dance?
The arrival of sweeping waves entering unsuspectingly (as they often do) in piano, and the whirlwind dance of the majestic turbulence begins. With crotales adding that shimmer to this body of sound, as if they are light bouncing off the glass like surface of “our object” diving in and out of foamy waves.
Only to finally disappear in the calm reflective surface of this body of water.

It will turn out that this was “O Zomer!”. I guess it is only appropriate (for my senses) to have felt this as sound of water, waves, winds, reflective sunlight beams… Both minimal and dense, one can easily notice extreme amount of imagination, thoughtfulness for adequate measure of each gesture that Apartment House gives, making each performative decision perfectly balanced and in service of the music.

The bottom of the abyss. The ground shakes underneath the feet. Almost as if it is trying to discourage the adventure ahead. But…
The fearless explorer starts to move. To walk. To climb. A little up… a bit back down.. then again up… and so on.
As much as the pitch material is moving up, somehow it is starting to feel like this whole journey is going to be moving retrogradely. As … if we are being taken back to the beginning. The journey of this explorer is ascending back into their youth.
After a continuous climb, or descend in this case, the first rupture. It is as if that arriving point has triggered a specific memory.
After a few moments, this second panel (second movement) begins.
And suddenly there is this innocent, shy creature carefully stepping down onto the stage with the e-minorish pattern to its step. It is immediately being welcomed by a mass fanfaresque response. So all together, the voice and the mass, continue to move up and down, following the maturing bravery of once shy creature. It is the unexpected whistle that gets you though…
Perfectly timed and placed, as unexpected as it appears, you are taken aback for a split second thinking that you subconsciously bursted into lullaby (that you have never known was sung to you). And as the whistle disappears, so we come to the end of the second movement.
Entering the final stage of this return to childhood.
In whole of the intricate mastery of this performance, it is those last few notes of the piece that attest the most to the detailed sensibility and sensitivity Philip Thomas gives to each note, to each and every sound. As they suddenly stop, they have begun something.

This was the second track, ‘Philip the Wanderer’, commissioned by Philip Thomas with the support of the Canada Council. This amazing work takes you on a journey of self-reflection and desire to dare and wonder. In some ways, but in a completely different sound vocabulary and aesthetics, it is almost as Cassandra MIller’s ‘Philip the Wanderer’ is a close friend to Sofia Gubaidulina’s ‘Der Seiltänzer’. You know, “a close friend” in that place where pieces have a world of their own in which they hang out, regardless of human perception.

The next one, from the very first sound: a burst of energy and spirit. And it goes on to develop into a majestic display of fierce purposeful boldness with this mono material, accumulating energy through minimal gradual changes over uneven mid-section repetitions. The piece, ‘For Mira’, was dedicated to Mira Benjamin, or as Cassandra Miller says: “dedication to violinist Mira Benjamin, for her down-to-earth, no-nonsense gritty focus”.

And so we move on… to the mesmerising last track.

The piercing heartbeat of persistent destiny that is there to drag in the monumental resemblance to orgelpunk echoing the imaginary churches of faith in humanity, while in its simplicity being the predictor of certainty of times to come. No mater what happen around.
This deep voice is so present that it takes your breath a pause. It keeps your heart on alert. It seems so simple, that you should be able to “ignore it”, yet it is simultaneously foreground and the background. It is intertwined within all the other voices that come and go, while it is also an envelope of all the sounds. ALL the sounds. Ever! (it starts to feel like that after a while). It goes on so persistently, until it pulls the whole orchestra to melt in this destiniouss entity. It is full of “old melody” and “new oddness” and melancholy. And as this end makes you fearfully reminiscent of the past, the final “epilogue” definitively launches you back into hopefully imagining the future.Reminding, just in case, that destiny is a noun to be shaped, and not a verb that defines the shape.

Then one picks up the CD pocket and reads: Duo for Cello and orchestra!!! Well… No wonder!! That seems like the only appropriate title for this gem!
Later on, I read Cassandra Miller saying: “Then one time I tried something out on my computer, but didn’t like it, so deleted the cello part, but for some reason it only half deleted it and what was left was this one-five-one. So when I pressed play I heard by accident what it sounded like together and I thought, ‘Oh shit, that’s it!’ So that was a very happy accident, but then because it was for Charles Curtis it kind of made sense it being so minimal. But it’s funny when people ascribe me the credit of thinking of something like that, because I can’t claim it, though I suppose I can take credit for choosing to go with it once I’d found it.” [via Another Timbre]
Well, I guess if there ever was a need for another proof that there are no coincidences, this must be it!